The human ear consists of three major parts: the outer ear, middle ear and inner ear. The outer ear consists of two parts: the external ear and the ear canal, also called the channel. The main role of the pavilion is to direct and amplify sound in the channel. The flag is fibrocartilage, while the channel is composed of a bone and cartilage part. The middle ear consists of the eardrum, the eardrum and the Eustachian tube. The eardrum is a membrane at the bottom of the channel, vibrant and amplifying sounds. The eardrum is the home of the smallest three bones of the human body; hammer, anvil and stirrup. The stirrup is the smallest, its maximum height is 4 millimeters. The Eustachian tube, in turn, consists of a tube that connects the throat and ear drum, having a responsibility to balance the pressure by opening and closing. So the great head of the felt during altitude variations earache, as aircraft. 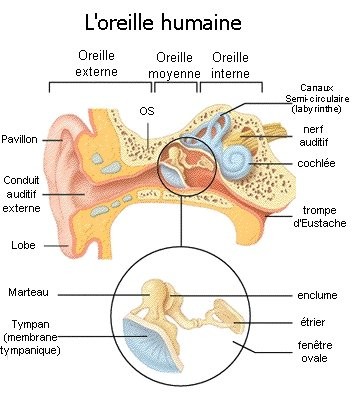 The inner ear plays two major roles; transmit sound to the brain and ensure the body balance. This part comprises, among other ear, the cochlea, a snail-type which includes sensory cells. These cells move under the influence of the movement of liquid endolymph and perilymph. These cells are often the cause of hearing loss, in fact 90 to 95% of deaf people have damaged or dead cells in the cochlea. In short, the sound is picked up by the sensory cells in the cochlea, and then be converted into nerve impulses in order to get to the brain.

The balance, as mentioned earlier, we also ensured by the inner ear. In fact, three miniature canals filled with endolymphatic fluid that informs the body of its spatial position. For example, if you turn quickly on you, and you stop altogether, the head continues to turn to. The cause of the dizziness is the continuous movement of the liquid in the channels. In fact some people have a condition called “Meniere’s disease”, which comes from a dysfunction of the inner ear.